THE SERIES IS COMPLETE!

WHAT WOULD YOU CHOOSE, LOVE OR DUTY?

On the brink of civil war, the Torrian Alliance continues with its mission to obliterate Star-children across the universe in order to suppress an intergalactic evil. Following the recommendations of his council, King Gregorio Derry reluctantly agrees to send his only son William on a mission to restore honor to his family name. William seeks to complete his assignment, the elimination of a Star-child named Sydney on planet Earth, but when the assassination is delayed he begins to realize an emotional connection with his target. With conspiracy threatening his home planet, and a hidden menace on Earth seeking to secure a vested interest, William finds himself torn between irrevocable duty and sacrificing everything he stands for to defend Sydney. As William and Sydney struggle to overcome their impossible circumstances, they start to wonder if the connection of two Star-Crossed lovers will be enough to save them from certain doom. 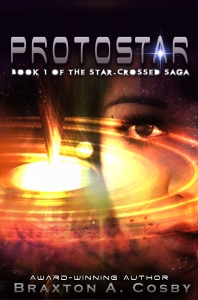 “This Young Adult Sci-Fi book has it all: romance, innocence, mystery, intrigue, prophecy and adventure. While this plot has been used before, Braxton Cosby puts a fresh new slant on it…This clever book was written for the true Sci-Fi connoisseur. Cosby writes like a seasoned author and I look forward to the next installment in this series.” Anne B. for Readers Favorite

The Endorsements are in for Protostar. . .

“This story reinvents the definition of young love and tugs at the heart-strings.”

“Braxton Cosby’s stories feel personal and well thought-out. I’m happy to welcome this entertaining writer to the YA science fiction field. I look forward to more of his work!” Tananarive Due — author of My Soul to Keep

WHAT YOU CHOOSE, BECOMES YOU…

Against everything he had known as truth, William has made the choice to protect Sydney from the forces seeking to destroy her. But just as these two Star-Crossed lovers are beginning to explore their relationship and search for answers to the mysteries of Sydney’s existence, she advances to the next stage of her Star-child evolution—Supernova—and struggles not only to control her new powers, but also the emotions for her new love. William seeks to find the truth behind Sydney’s erratic behavior, while overcoming the new threat headed to Earth to destroy them. With new villains and old allies on the horizon, and chaos brewing on William’s home world, will self-sacrifice prove to be the only way for him to achieve victory and defend his love, or is there another way?

The follow-up to the debut Award-winning novel PROTOSTAR! 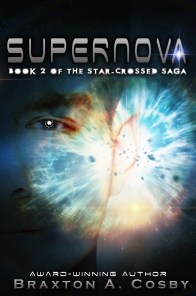 WHAT YOU BELIEVE, CAN DESTROY YOU!

William and Sydney have sacrificed everything to fortify their love, so much so that William dares to brave the depths of space to find a cure for their deadly Supernova bond, leaving both her and Earth vulnerable to Torrian Alliance attack. But with a full scale rebellion in play on Fabricius, the reality of Sydney’s execution from Torrian hands is diminished, only eclipsed by the certainty of a more threats – The Third Faction and The Dagmas Clan – lead by Dominic and his insurgent recruits. With overwhelming odds mounting against them, William makes a desperate attempt to find the last of the endangered Star-children only to be captured by a new menace, where he is forced to compete in the dreaded Gauntlet of sport. Allies surge to free Fabricius, seeking alliances across the galaxy while Sydney tries to keep her identity hidden and trains to master the third phase of her Star-child evolution: Solstice. With Sarah’s mysterious return home with clues to unlock the future, Noella’s training and Bill’s symbiotic development hope is restored, but will it be enough to unite the galaxy and destroy evil for once and for all?

“Perfect for fans of TWILIGHT and LEGEND!”

“Solstice turns up the heat! Book 3 of The Star-Crossed Saga will thrill young readers who love science fiction everywhere. Braxton Cosby has created a dystopian world of original characters that are imaginative and daring, courageous and compelling.  Three times is a charm!”  – Adriana Trigiani, bestselling author 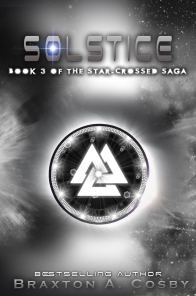